Experiences at the Birmingham Mind Body and Spirit Expo

Nov 3-5: MFI at the Mind Body and Spirit Wellbeing Festival in Birmingham!

From 3-5 November, our team set up a booth at the Mind, Body and Spirit Exhibition in Birmingham. Our booth was directly in front of the entrance to the exhibition. One large banner featured the divine signs on the Moon and on the Holy Black Stone and another depicted the message of Revolutionary Holistic Healing. It was quite busy and there were a lot of different people from diverse ethnicities, religions and belief systems. The following are selected experiences from loving souls who came to our booth during the exposition. 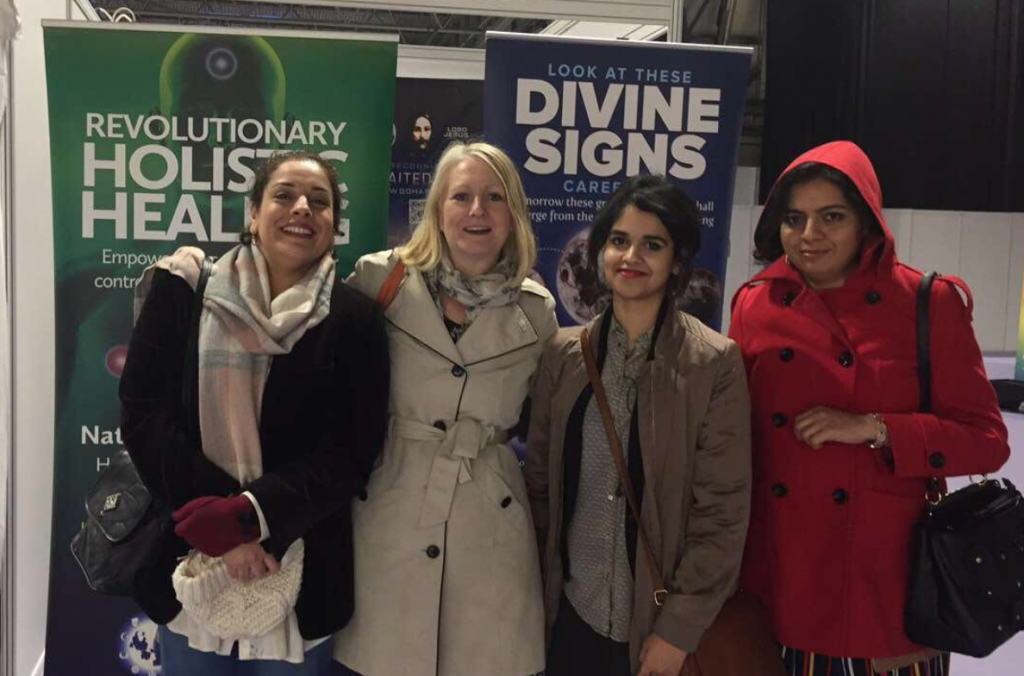 The next day as we were packing up, she came back to us specifically to thank us and tell us how happy and grateful she was for the message and the spiritual healing. She told us, ‘I know it sounds silly, but it was a Full Moon yesterday and I spoke to the image on the Moon last night.’ She was extremely happy and thrilled with joy; she said that she would look at the Moon again and told us to keep up the good work. She hugged our team members and took pictures with us. 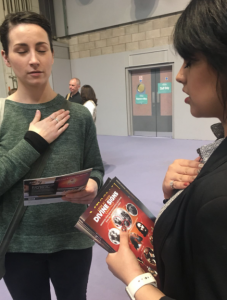 Francisca was an atheist who came by our booth and listened to the universal revolutionary message of Divine Love and learnt about the Opening of the Spiritual Heart with great interest. She took the name Ra Riaz and experienced a rise in heartbeats and heat in her chest. She was very happy and satisfied; she took our literature and the Messiah Herald magazine with her to study. 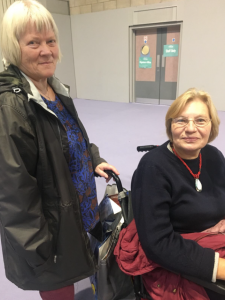 An elderly woman was drawn to the image of His Divine Eminence Gohar Shahi as she was passing by our booth. We explained to her the message of Divine Love and spiritual healing and we let her know that all our literature was free. She was very pleased to hear our message and asked for the Opening of the Spiritual Heart. She and her friend took the original name of Jesus, ‘Ya Isa’.

Hasnah, a member of our team, relays what happened next.

‘After the spiritual healing and taking the Opening of the Spiritual Heart, she kept her eyes on the image of His Divine Eminence Gohar Shahi. As our team member was explained the practice method for the next seven days. Then, she suddenly interrupted asking, “Has Lord Ra Riaz been to Norway?”. When we told her yes, she smiled sincerely and said, “Yes, this is Him.” Then she told us that she had seen His Divine Eminence on TV in Norway before. She took bundles of our literature: images of HDE, leaflets, magazines and The Religion of God (Divine Love) book with her to take back to Norway for her family and friends. She was extremely happy and satisfied; she kept thanking us. She hugged our team members and took pictures with us before leaving.’ 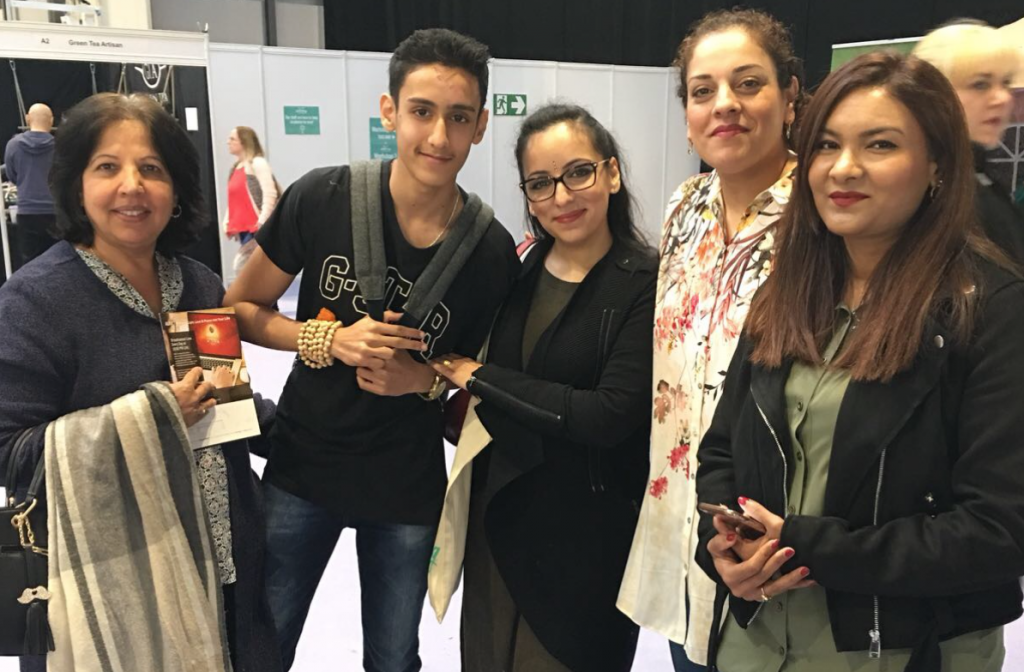 Another woman was fascinated by our universal message of Divine Love. She was interested in taking the divine name, Ra Ram, after learning the secrets behind it. Referring to the name, she asserted that it was ‘such a beautiful combination of names.’ She took the Opening of the Spiritual Heart, immediately after which she opened her eyes and said that she felt gushes of wind coming at her face as well as lights. She kept asking in astonishment if one of our team members were fanning her or if there was a fan nearby.

She said that it was, ‘The most amazing experience in my life. I have never before experienced anything similar.’

She later brought her mother and her son for the Opening of the Spiritual Heart. Her son took the name Ra Ram and her mother took the name of Krishna. Both of them were happy after the spiritual healing, before taking a picture with our team. 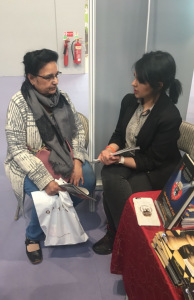 tened to the entire message of His Divine Eminence Gohar Shahi with keen interest. She asked numerous questions and spent nearly an hour at our booth. She took the Opening of the Spiritual Heart of the name Guru Nanak. She kept her eyes closed and her hand on her heart for over 15 minutes subsequent to this. She seemed speechless and overwhelmed, as her expectations had been massively exceeded. She told us that she saw lights during the Opening of the Spiritual Heart. 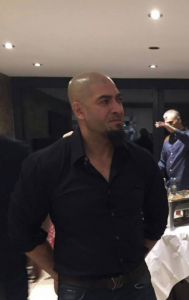 Another visitor at our booth, Atif Iqbal, said to one of our members, ‘I will visit the website. I’m sure there is lots of content on spiritual development and ways to enrich the soul. I must confess you did resonate a lot of positive energy (a rare gift). You were engaging; I was very much present and absorbed in our conversation. On reflection I do wish I had talked to you more – you are such an uplifting soul.’

On the last day as we were closing up our booth and had already packed up all of the literature and the banners, a young woman by the name if Jessica came to one of our members. She seemed eager and said, ‘I know you have already packed up but can I please take some leaflets?’ We explained our mission to her and she listened with a lot of love, attention and curiosity. As soon as we mentioned the image of HDE on the Moon, she said, ‘I saw the image on the Moon on your banner. That’s why I came.’ We then offered her spiritual healing and the Opening of the Spiritual Heart. As soon as we told her about the grand name Ra Riaz, she interrupted and said, ‘Yes! I want to take this name.’ After the Opening of the Spiritual Heart, she was extremely happy. She experienced heat in her chest. She took a lot of literature and all the available editions of the Messiah Herald with her. 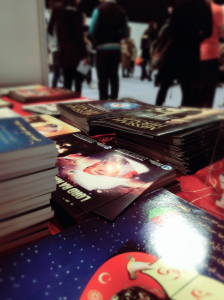 The above-mentioned incidents are just a few among the top highlights from the Birmingham Mind, Body and Spirit exhibition. From the moment we set up on the first day to when we were packing up, people of different cultural backgrounds and diverse ethnicities came to our booth; they left with satisfaction and gratification.

Most of the people who also took spiritual healing experienced a lot of positivity. They either saw coloured lights, felt some heat in the chest, a sudden rise in heartbeats, positive emotions or a sense of feeling a sudden burden off their chest. The responses and experiences were fantastic for the team and all the attendees who came by our booth for either spiritual healing or to learn about our universal message of Divine Love, peace and global unification.